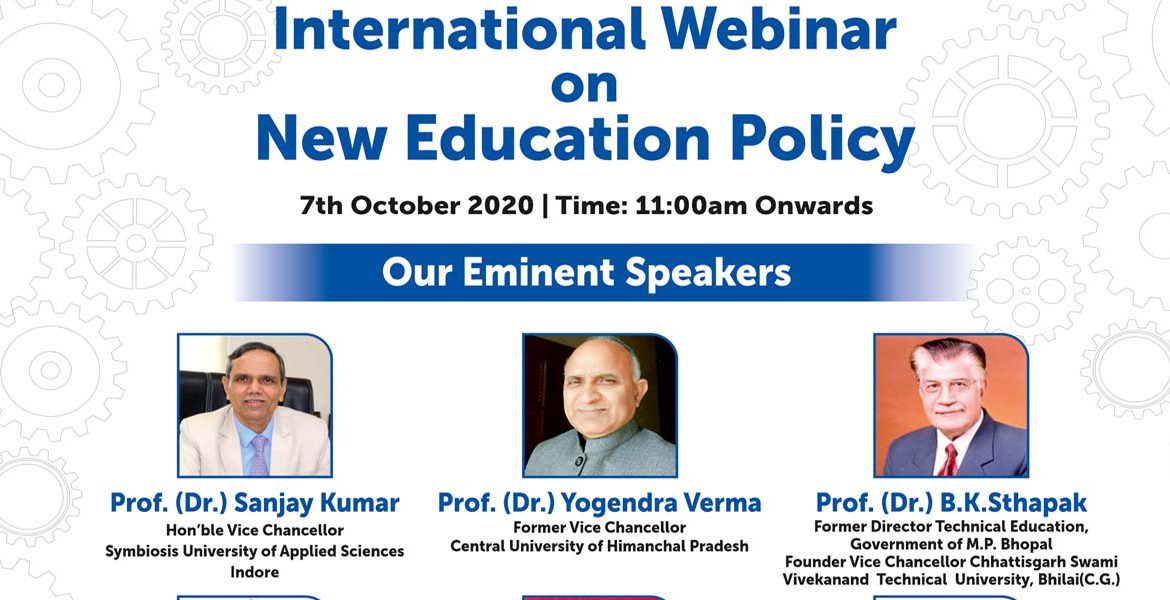 School of Banking, Financial Services & Insurance Management, Symbiosis University of Applied Sciences, Indore organized an International Webinar on the New Education Policy-2020 on 7th of October, 2020. Webinar got an overwhelming response and there were more than 350 registrations. These were represented by 15 states across India.

The webinar was started by Honorable Vice-Chancellor Prof (Dr.) Sanjay Kumar’s opening speech. He welcomed the guests of the event and then moved on to discuss how robust our educational policy is and how it has evolved in the last 34 years. He mentioned the aim of this policy is to make India a global knowledge superpower. He said that there are 8 fundamental reasons due to which changes were required in the education policy. The main aim of this policy is to increase 50% gross enrolment to 100% in the country. i.e. reduce the dropout rate. He also mentioned that SUAS is working towards the improvement of technology. He concluded his speech by mentioning that his aim is for the university to produce employable degree holders and furthermore solved the queries of the participants.

The next speaker Dr. Yogendra Singh Verma started by talking about the policy being crisp short and robust. He concentrated on only certain things where he believes that this policy is overhauling the system. He talked about the Gurukul teaching system and how it connected beautifully with the current education policy. He believed that citizens have to be educated open-mindedly for the economy to flourish. He thinks that school is the weakest aspect of our education system where schools should be fun and not intimidating. He said that the wisdom which exists in several languages is beautiful and should be learned enjoyable. His university has started working efficiently towards the credit point of the students already. He believes trending learning is an important aspect for the students. He said that principles have to be changed for a change in our country which will transfer India into a knowledge power. Towards the ending, sir solved everyone’s queries patiently.

The next speaker, Dr. B K Sthapak started by mentioning that this has been the first document being prepared over 5 years by taking into consideration more than 2 lakhs of suggestions. He found this policy to be standing on 5 pillars: assess, equity, quality, affordability and accountability and believes these are the factors helpful for a policy’s success. He believes that we can easily compare our past and present with the help of this policy. He mentioned that this education policy would help in uplifting society and throws several challenges to the youth in order to prepare them for a better future. He emphasized that our actions would be the basis of our personality, thinking and life. He concluded by saying that the citizens of our country are ready to adapt to the changes in the policy.

Dr. Ganesh Das started by mentioning that it should have come into the picture around 3 decades ago. According to him, Practicality, performance, thinking process and analysis are important to understand that the textbook approach has killed these aspects. He said that students must have a strong critical analysis. He believes that perception matters and one should not force the students to read textbooks rather focus more on strategic thinking as our generation is the smartest compared to the other two. He emphasized that teachers should also be given a job that is under their forte to get better results. He mentioned that knowledge should be given through dynamic methodologies. His experience at SEU has been different and the university has also been upgrading its systems religiously which should also be followed by Indian Universities.

Dr. V Aditya Srinivas said that this policy is the need of the hour. He found out that students have degrees and qualifications but are not skilled. He liked the fact that this policy focuses more on the application–based education impartment. As per him internships are an important part of a person’s life and the NEP will help in the creation of job opportunities. He expected that this policy can help students in settling their lives and become mature at an early age.

Last speaker Dr. Debapriyo Nag started by describing the methodology being used by his university. He said that diplomas in Africa are strictly regulated. He mentioned how everyone in the country is given equal opportunities to study. He said that in Africa people start working at an early age due to high pressure however in India things are different. He liked the fact that in India funding is easy for students. He concluded his speech by mentioning that the government has taken the right step since a lot of students moving towards foreign countries will not face many issues while doing so.